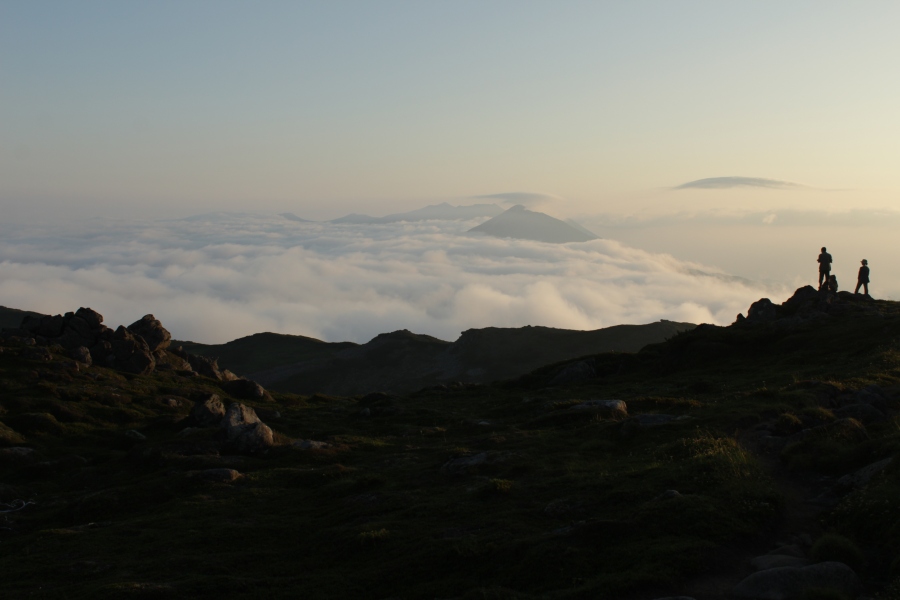 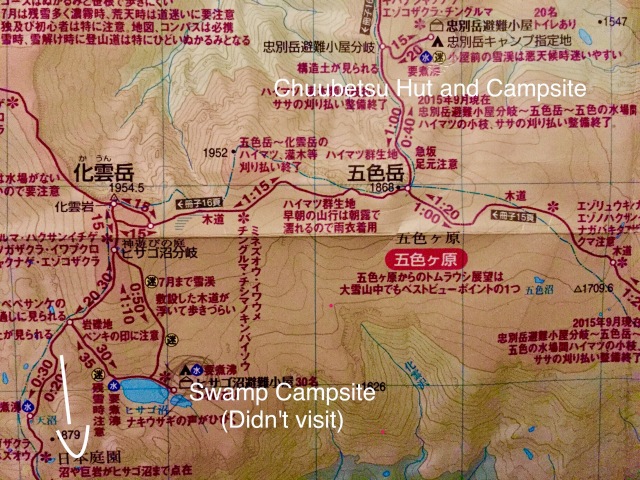 We awoke thoroughly aware of how well we’d slept but just how much more we needed. The hut had been toasty and cozy throughout the night, especially as we slept on the upper floor. Although it was disturbed at 3:00am by a loud group of teenage boys leaving noisily and leaving the door wide open. So, we were out and walking at 5:30am. 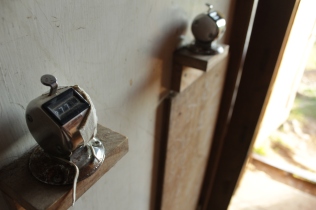 The first ascent was simple and pleasant, and the cool morning air helped us to make good time. The first summit, Mt. Goshiki, rewarded us with a clear panorama of the park, the lower lying mountains coated with smooth, whipped clouds. From here the path dipped into more foliage so our view was obscured but the going was easy. Eventually, we exited the bushes into a swamp where the path was replaced by sturdy decking, sporting deep cracks on its thick planks. Having mostly dried out, the marshes were covered in soft grass, dancing in opposing patterns with the strong winds. Further along we took the 30 minute detour to summit Mt. Kaun, gaining another clear panorama that showed us the top of Mt Chuubetsu which had been obscured in clouds the previous day. Joining the path again we continued onto Mt. Tomaurashi. Turning left would’ve taken us down to Hisago Swamp Hut and Campsite. We chose not to stop there as the hike would’ve been far too short for one day, adding yet another day onto a long hike. However, it does have a very reliable water source and a hut.

From here the path was rocky and easy to lose our footing on. It plummeted and rose sharply in quick succession, the rocks slowly gaining size. After skirting a snow melt pond not listed on the map we came to an abrupt halt in front of a pile of boulders, most larger than myself.

We couldn’t see any of the yellow markers, nor make out many footprints but checking the map with a compass showed we were supposed to continue across them. So, we started out, leaping and hauling ourselves along like we would’ve when we were children playing on the groynes at the beach. The only difference being that we were tired adults carrying 50 litre packs., and they slammed into our backs with each jump. After a while we saw a yellow circle painted on a large flat boulder, and made our way towards it. From there the markers became a little more frequent and we started to see dirty rocks from where people had passed through. The way became a little easier before leading us to the base of Mt. Tomurashi, a dwarfing pile of boulders, of the like we’d just encountered, jammed together to make an improbable mountain.

The ascent was expected to take an hour and a half but it took us two hours. It ended up being easier than the view from the base suggested but required hauling myself up with my arms just as much as my legs. From the top  of this part the path was a unchallenging wander downwards, towards a very large body of water which we skirted via another snow ledge. After that it was a short walk further before we hit Tomaurashi Campsite, tucked underneath the peak. 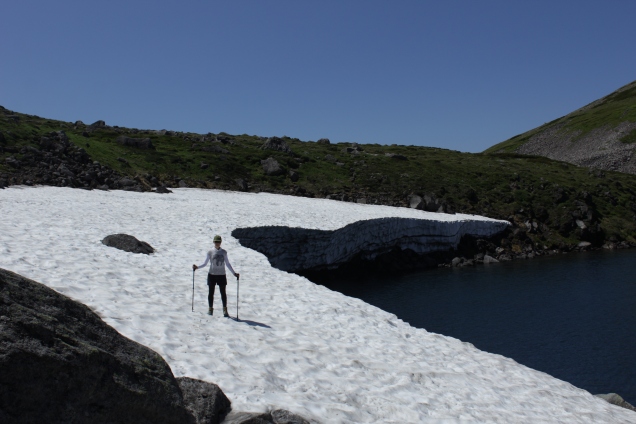 Mt. Tomurashi summit was a clean 1 km climb and has a reputation for beautiful sunsets and sunrises. Many Japanese hikers made a point of telling us this as we weaved around the campsite warrens. Indeed, as we rounded the top it was easy to see why. Spread out below the level of the campsite was a carpet of clouds, broken up by the mountain peaks, upon all of which an orange and indigo sunset laid its colours down. At the edge of our vista the cloud cover ended, beneath which I could see the darkness of night, interrupted by the tiny lights of civilisation.

The campsite wasn’t a round patch of cleared earth as we’d seen previously. Rather, it was a rabbit warren of camping patches connected by paths so overgrown with grass you couldn’t see your feet. Some of the camping patches allowed for 10 or more tents, others just one. There was an on-site portaloo with a fixed toilet that allowed you to insert a bag under the lid, the idea being you take your business away with you. However, amongst the grass mounds and rock formations there was a lot of abandoned human excrement and tissue. Whilst I think the toilet was clearly stupid as no one wants to carry their effluence around with them, I did find walking out around the campsite a little disgusting. For me, leaving used tissue lying around was a bit too far. That can easily be packaged up and taken away to reduce impact. 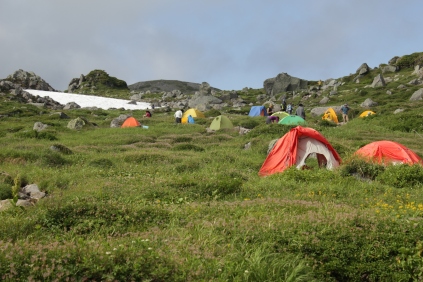 It’s worth noting this campsite became crazily busy. By 5:00 people were camping in the soft mud next to the stream, as they simply couldn’t find anywhere else they could fit. As we arrived at 1pm we had the pick of the camp. The water supply wasn’t a problem, and although down by the campsite the supply wasn’t the largest there were two bodies of water coming off the snow drift a short walk back the way we came. 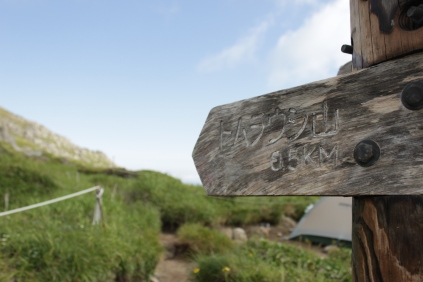 ~where the elderly go to play mahjong~
Temple of Heaven
Last one I swear! 🌱🐛🐝
.
🌱 Bluebell Season 🌿
~a snap from my saturday shoot with @ionyamazaki to be featured in the upcoming Transitions Exhibition~