Knowing the next section estimated seven and a half hours of hiking we woke at 3 and were walking at 4:30, with the rising sun behind us. The brisk air gave us impetus and layers of whipped clouds folding out beneath our descent, permeated by the roofs of mountains, gave us hope for a beautiful hike. We started out feeling positive and enthusiastic, and by the time we finished this day we were utterly spent of everything we had, and more. 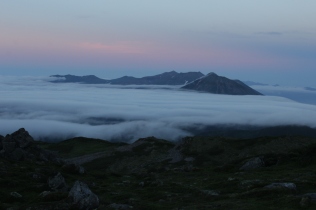 Our journey started easily enough by tracing a rocky path around the mountain edge.
The first sign that this would be a very different type of hike compared to previous days came when we had to skirt a narrow ledge with a bottomless drop, the view obscured by rushing clouds that grabbed at our clothing. The wind was brutally strong and laden with moisture so that I was wet all up one side when we peeled away onto a more protected path. However, this protection also came with knee-high wet bushes that slowly deposited their moisture in our boots.

Shortly, a mist also rolled in obscuring our vision to less than 8m. Soon we arrived at some extremely dodgy signage giving three routes as options. We stopped and checked it with a compass several times, used our understanding of katakana and some kanji to assure we had the correct way, and it lined up with the map, before proceeding down the middle path, which was signposted as オプタテシケ (Oputateshike). If you take this path please ensure you check your route thoroughly at the time and prepare yourself, and the map, to cope with the Japanese signage. The pole holding the signage was skewed at a significant angle and the sign did not list Futage Ike Pond but the name of the coming ridge instead. In Japanese only. 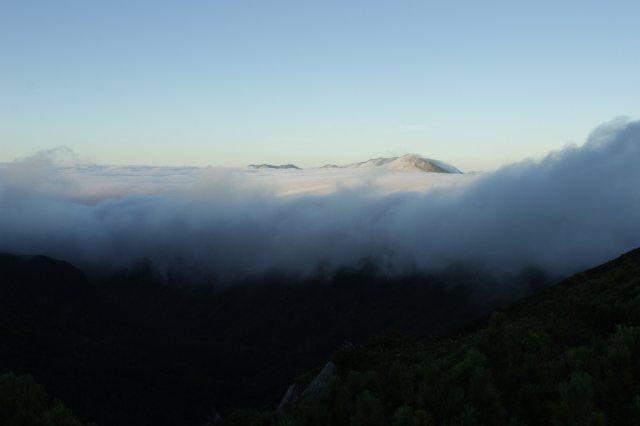 We descended into a messy forest of bamboo shoots, growing increasingly in size until they were towering above our heads. Unfortunately, this wasn’t in the style of Kyoto’s famous bamboo forest, but rather as a leafy, entwined mass that required shoving ourselves bodily through to get anywhere. The going was slow, and roots and dips regularly caused us problems as we couldn’t see our feet.

By the time we cleared the bamboo the rain was starting in earnest, limiting our visibility further. Pulling out our waterproofs we adjusted and continued, worried about stopping for too long, our terrible mistake soon becoming abundantly clear: we didn’t have any gators. Our boots filled and we sloshed on.

We slogged on across the ridge, a long straight path consisting of 3 checkpoints was not as simple as it looked on the map. We scrambled on hands and knees up and down muddy inclines, climbed and hoisted ourselves and our packs up steep ascents. We were helped in some areas by imbedded chains.

The ridge was buffeted by the wind driven rain but we found we could avoid it by keeping our heads tucked down under the gorse. This was the most exhausting and trying section of the whole Traverse. The hours ticked by and no checkpoints had appeared. To boot, the path was wild and completely deserted.

Rounding yet another meaningless peak obscured by clouds the sun came out, and with it the lay of the land returned.

We whipped out the map, not knowing how long this would hold, and looked around. The peak we were sat on actually had a higher, very rocky, peak adjacent to it and from there we realised that we had covered all three checkpoints of the ridge in 2 hours, 1 hour less than expected. As it was a straight line, none of the checkpoints had been signposted. Relieved, and a little annoyed, we allowed ourselves our first proper break to munch and look around. It was then, as we looked down the peak we were standing on and up at the next we were about to mount, that we saw a black bear lolling on the grass between the peaks.

Hokkaido’s black bears are, in fact, grizzlies. And, of course, we’d recently watched The Revenant. We set off down the decline, bells swinging madly in hand. Our descent had us disappear into bushes and so it wasn’t until halfway down that we stood on the embankment to pop our heads above the gorse. And there it was, a black bear, stood sideways against the sun and absolutely unmistakable in its size and shape. We dropped back down, looked at each other, and speed walked down the descent and up the side of the other mountain, dinging our bells ferociously as we went.

The peak was overgrown and afforded us no view to check the bear’s whereabouts. But, as we rounded the peak, two Sika deer froze to judge us, before leaping gymnastically down the mountainside in smooth, high arcs, their fluffy white bottoms bounced around behind them as if they were wearing pantaloons.

If deer were up here grazing, then surely the bear wasn’t near us nor interested in this peak. We hoped. Nevertheless, we didn’t pause. The path became rocky and bush lined but the going was easy. As we walked over the top of the levelled peak we saw a cluster of house sized boulders marking the beginning of yet another bamboo covered path. We stopped here and ate again, climbing up over the boulders to assure that the bear was still in his spot. And, of course, he was.

With my boyfriend assuring me that the sheltered leaf filled area underneath the rock formation was the perfect den for a bear, we moved out. And spent the next 2 hours picking our way through yet another bamboo tunnel that towered well over our heads.

We were spat out the other end utterly exhausted and feeling claustrophobic. The going was physically demanding, with strong bamboo hemming us in on all sides and affording nowhere to sit and rest.The muddy path slipped us up many times and we became filthy even by hiking standards. But in front us now were the remains of a once beautiful series of small ponds, feeding into each other, as they came down the mountainside. But now was a collection of muddy craters. This was Futage Ike Pond, and it turned out it dried up every year in early July.

It was deserted, and remained so. We had a choice, hike the gargantuan Oputateshike and continue to the hut, another 5 hours of hiking. Or set up camp, rest, find water a ways back and set out early. We chose the latter.

Reluctantly we dived back into the bamboo and within half an hour we found the water source. It was small and still. We filtered and boiled everything, just to be sure.

Seeing as we were only actually 1 peak away from the bear we cooked 100 feet away from our tent and hid the food 100 feet away too, camping next to the bamboo to give us some shelter. It took us a long time to do all of this though, our clothes smelling of swamp, our hair and bodies muddy and matted, and by this point, our minds utterly blank. We sat there staring out of the tent, not thinking to speak or do anything other than sit there and drink tea.