Of all the food I’ve discovered in Japan I’m always most surprised that Okonomiyaki is the least recognised internationally. It’s incredibly delicious, celebrates the enduring Japanese love of cabbage, and there’s the crowd pleasing performance of cooking it yourself at your table.

Okonomiyaki, translated to ‘grilled as you like it’, is a flexible dish that can be chopped and changed to suit your desires. Its base ingredients are shredded cabbage, an egg, tempura scraps, flour and a little milk.

However, it’s in the additional choices that things get fun. Some play it safe with a pork addition, and some get adventurous by adding mentaiko (spiced cod roe) or umeshu (soured apricots). My personal favourite is mochi (pounded rice cake) as it melts into a texture similar to melted cheese. 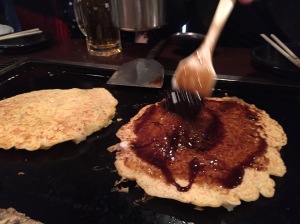 Whatever selection you choose it will be delivered to the table in a little metal bowl, with a spoon ready for you to give it a good mix. I can just imagine my fellow Brits now, angry that they’re paying to cook their own food. Seafood, no less!

After mixing it thoroughly together you’ll pour the mixture onto the hot plate embedded in the middle of the table, adding a splash of oil beforehand. Spread it out a little with the metal paddle, then watch it cook. The waiting staff usually do a good job of monitoring the heating level and providing a helping hand to lost foreigners. 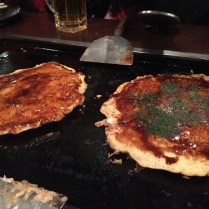 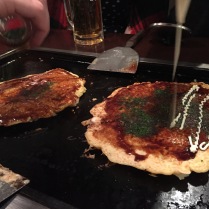 Just like a pancake you’ll need to flip it once the bottom side is cooked using the metal paddles. It’s customary for the flipper to flip it towards themselves, so any splattering batter won’t hit innocent watchers.

Once you’ve successfully flipped, you’ll have to put the magic sauce on; okonomi sauce. You’ll find this sauce everywhere as it’s a staple in modern Japanese cooking. After spreading out a generous helping of sauce using a basting brush, you’ll criss-cross the surface with mayonnaise. The particularly skilled can take a thin stick and smudge it into patterns.

The final toppings are a healthy sprinkle of powdered nori (seaweed) and bonito flakes (shaved fish flakes). Once the other side is fully cooked, and all your dressings are dressed, you’ll split up the pancake according to group size using the metal spatulas, then serve it onto the little plates ready to eat.

After that, you start ordering more and more, becoming adventurous in your choices, until everyone is ready to roll happily home.

Of course, as with all national dishes in Japan, there are famous variations by prefecture. Although Okonomiyaki originates from Osaka, and you’ll find a very tasty verison there, the most famous variation is from Hiroshima. Noodles are included in the mixture for your added carb delight, and rather than being cooked all at once, it is cooked layer by layer, so as to make a stack.

The style I’ve talked about above is Tokyo style Okonomiyaki but if you’re interested in Hiroshima’s then you can drop by their famous food theme park お好み村Okonomi-mura, which is named after their variation of the dish.